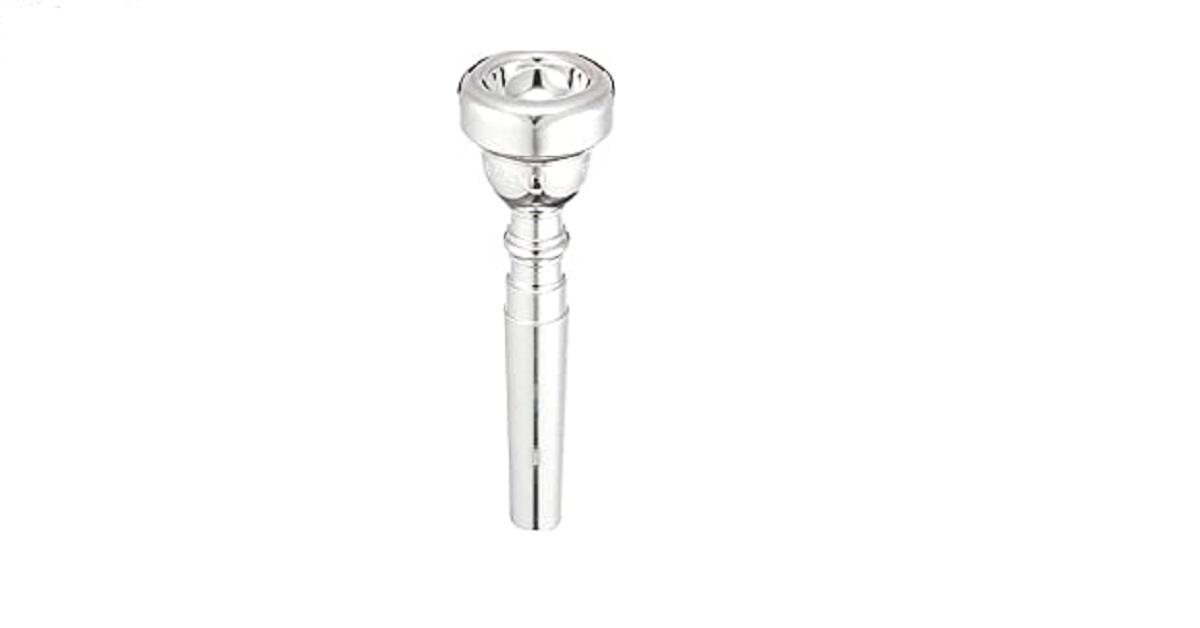 Today we are going to take a look at the Bach 5c trumpet mouthpiece specs, how it plays and some other interesting observations.

One thing is for sure though, at the time of writing this article the pricing was shockingly low on Amazon! You can click here  to check current pricing.

Ok so, so let’s jump in and take a closer look at the Bach 5c mouthpiece.

Bach mouthpieces are one of the most well-known brass mouthpieces on the market. The bBach company has high standards and produce mouthpieces with consistent quality.

The 7c mouthpiece is perhaps the most common one, of all Bach’s mouthpieces, which is a bit strange since there are so many to choose from, and the 5c is a better mouthpiece in my opinion. Well, perhaps I should point out that it is of course also a matter of taste…

…we are all different, with different teeth, lips and face structures, after all.

With that in mind, in this article I’m going to talk about the facts  about the Bach 5c, as well  my personal preferences and opinions, where I feel that those are needed.

The mouthpiece produces a nice, warm and full trumpet sound. This is because the cup is a good sized Bach “c-cup”. It’s not so big that we have to have a very robust embouchure in order to play it, yet it is not so small that the sound becomes thin.

I actually like the size of the cup on this mouthpiece. It’s not as deep as the 7c cup, but it’s a bit deeper than on the 3c.

It’s a very good all-around mouthpiece, and thus you can use it alsmost everywhere.

The depth of the cup, being a c-cup, and the size of the cup makes it a good all-around trumpet mouthpiece that you can play in whatever setting you want.

It is a perfect mouthpiece for classical music or for playing smooth ballads or jazz improvisations. It’s also good for marching band or for example brass quintet playing…

…or, for playing a beautiful trumpet solo in church.

That said, if your main job is to produce really sharp and cutting high notes in a big band, you would perhaps be better off with a a mouthpiece that is slightly shallower.

Don’t get me wrong, the cup on the 5c is not so deep that high notes are difficult, but if you need that cutting edge “lead-sound”, you might want to check out my article “Top 4 best mouthpieces for high notes”

Feel On The Chops

The 5c feels really good on the chops. One reason for this is that the outside of the rim is slightly rounded, making your lips grip the rim in a comfortable way. This helps with control, as in hitting the notes more securely…

…also, a lot of trumpet players find that the flexibility is greatly increased by having a rim like this.

As the rim diameter on the 5c is one of those “middle of the road” sizes, most people find the high register easy to play with it…

…and because the cup on the 5c is not as deep as on the 7c, well, there’s one more reason most people find the 5c easier to play. I myself, being one of them.

Even though the cup is slightly shallower than on the 7c, it is still a “c-cup”, and by no means a “shallow” mouthpiece, so again, if you are looking for a specialized screaming lead trumpet mouthpiece, then the 5c is probably not for you.

Still, the high register is very easy to play on the 5c.

A big thumbs up in this department as well.

Agility (flexibility and ease of moving around)

Oh yes, this is where the 5c really shines. As I prematurely mentioned, the rim shape, in combination with slightly shallower cup than on the 7c, makes the mouthpiece really easy to play.

And by easy I mean it is so easy to move around, jumping from note to note and going up and down from low to high and high to low.

I could see how a trumpeter playing jazz would just love this, as he would want a mouthpiece that lets him play fast passages with notes that just “pops” out.

Very good indeed. I will give it full score here and a big thumbs up.

It’s good. The notes speak easily on the 5c. I suspect the rim shape helps with this as well as it might tend to bring the chops just slightly more forward, in my opinion.

There is no problems making the notes speak, even at very soft volumes. A big thumbs up!

No problems here. Not surprising really, since high quality mouthpieces nowadays have a backbore, throat and cup size that matches, work in harmony and rarely present any intonation problems.

Now, if you were to buy one of those cheap mouthpiece brands for under 10 bucks, it would be another story. So don’t do that!

With the Bach 5c you get a very high quality mouthpiece for a very good price. Seriously, at the time of writing this article the price was actually shockingly low…

…you can click here now to check current pricing at Amazon.

So, when it comes to price to quality ratio, I will give the Bach 5c trumpet mouthpiece a 10+

Ok there you have it, when taking everything into account and when weighing it against the current pricing I have to say that the Bach 5c trumpet mouthpiece is a very good mouthpiece for all-around use. I will give it a final score of 9.1 out of 10.

How Does It Compare To Other Mouthpieces

Well, according to the specs the 3c has a cup diameter of 16,30 mm, so it’s 0,05 mm bigger, which is almost no difference there. The 3c is shallower though and the rim shape is also different on the 3c.

The rim edge is more rounded on the 5c, and one thing to note here is that this is something that might make the cup size FEEL different between two mouthpieces that otherwise have almost the same cup diameter…

…simply because our lips “grip” mouthpieces a bit differently depending on the shape of the rim.

The 7c is a bit deeper, but it is not by much though. Also the outside rim is even more rounded on the 7c than on the 5c. When it comes to cup diameter the 7c are marketed and sold as 16,20 mm. So again there is a difference of only 0,05 mm here. Not much at all.

In my opinion, the 5c is a better mouthpiece than the 7c.

So, is the mouthpiece a good choice for you?

Well, if you are looking for a high quality, all-around trumpet mouthpiece with a comfortable rim that is not too big and not too small, then yes, you should definitely give it a try. It is easy to play, produces a nice sound and it feels very comfortable on the lips and it is also excellent for endurance..

…what more could we ask for…really?

I hope you found this Bach 5c trumpet mouthpiece review informative. If you have any questions, please don’t hesitate to contact me.

Some common questions I get about mouthpieces in general

Question: What is the smallest Bach mouthpiece ever made, and have you tried it?

Answer: I think that would be the Bach 20c, with a cup diameter of only 15 mm. No, I have not tried it and I feel no need to, as I already know that I would find it way too small.

Question: Do I have to use a smaller mouthpiece in a piccolo trumpet? I have not started yet, but I am going to buy a piccolo and I’m wondering about mouthpiece sizes.

Answer: You do not HAVE to use a smaller mouthpiece when playing the piccolo, but a lot of trumpeters do go a bit smaller when playing piccolo. You could for example keep the rim diameter the same while choosing a mouthpiece with a slightly shallower cup…

..but, then again, it is not difficult to change between rim diameters either. It just takes a bit of time to get used to, but once you do, it’s no problem.

Just start with your normal mouthpiece and then, later on, you might want to experiment with different mouthpieces.

Some people are afraid of experimenting, but there’s no need to be afraid of that as long as you don’t get obsessed about it. Personally, I try new mouthpieces almost every month, but that’s only because I’m interested and like doing that 🙂

Answer: Well, funny you should ask, because I recently wrote an article called “Best trumpet mouthpiece for endurance“, you might want to check that out.

Question: I have problems playing low notes on my Bach 1 1/4 c, should I try a bigger mouthpiece?

Answer: You could, however, if you have big problems on a 1 1/4c then it is more likely something in your playing that is off. Take a look at my article How to improve the low register on trumpet. In that article I talk about some common low note causes and how to fix them.

Answer: Yes and no. A trumpet mouthpiece won’t fit in a cornet and the same is true the other way around. When it comes to the rest of the mouthpiece, the mouthpiece specs, that you can see on online brass stores, should be the same though.

Alright, that will be it for now. I might come back and make updates on this article, as I sometimes do with my posts…

..thanks for reading, and keep practicing!

Hi, Robert Slotte here. As a fourth generation trumpet player in my family, I started playing the trumpet when I was 5 years old. So it’s safe to say my world pretty much revolves around trumpet playing.

I created this site because I want to share what I have learned throughout my years, and it is my sincere hope that you will find some value in it.

To put it simple:

I’m a guy who loves blowing air into a metal tube, and sometimes… the result is music  🙂

Suffering From Performance Anxiety Or Anxiety In General?

“This natural product has helped me enormously! I just take it two-three hours prior to my performance, and by doing so, my anxiety levels are about 80% lower during my gig”

I am a participant in the Amazon Services LLC Associates Program and as an Amazon Associate I earn from qualifying purchases. While I may be compensated for sales derived through this website, my opinions of these products are sincere and based on first-hand experiences and/or from detailed research, both online and offline. The products you order, won’t cost any more for you because of this, and it’s a great way to support the website, a true win-win situation.

Thank you so much!

We use cookies to ensure that we give you the best experience on our website. You can find more info in the "privacy policy" link down below. If you continue to use this site we will assume that you are happy with it.Ok